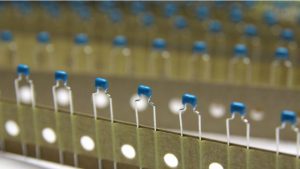 A team of scientists in Japan developed a new way to make safer components for electronic devices. One of the reasons that e-waste shouldn’t just be tossed in the trash is that electronics often contain ceramic capacitors made of lead zirconate titanate, a material that is hazardous to human health and the environment if it is improperly disposed. That’s why researchers from Hokkaido University have teamed up with TDK Corporation to develop non-hazardous capacitors. They are using perovskites, a type of material that has recently emerged as a contender for solar cells, because it is inexpensive and can exhibit excellent electronic properties. The Japanese scientists have shown for the first time that certain perovskites can also display dielectric properties.

Specifically, the Japanese researchers worked with perovskite oxynitrides, which are easily fabricated crystals. The main challenge the researchers faced was to make ceramics made from perovskites denser in order to improve their insulating properties. To achieve this, they first applied intense heat (1723 Kelvin) to the material using a technique called sintering. Then they annealed the material to remove any potential stresses, by heating it with flowing ammonia at 1223 Kelvin and then allowing it to slowly cool.

After this treatment, the researchers found that the surface of the material displayed a property called “ferroelectricity,” which proves for the first time that the perovskite oxynitride is a dielectric material that could be used for multi-layered ceramic capacitors. This research, which is described in the journal Chemistry of Materials, could be used to make non-hazardous capacitors for everything from consumer electronic devices to telecommunications transmitters.