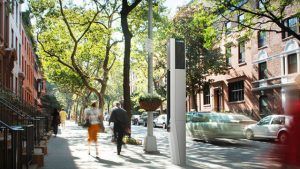 Thousands of obsolete payphone booths throughout New York City are now being transformed into a network of Wi-Fi hubs, in a project dubbed LinkNYC. The first two booths, called Links, were unveiled in Manhattan on January 5, with hundreds more to be built over the next seven months, and a total of 7,500 expected in the next several years. Much like the smart street light project in Los Angeles, The service will not only be free to the public, but it will also  generate revenue for the city. LinkNYC is expected to bring in more a half billion dollars through advertising on the kiosks’ screens.

In addition to beaming free Wi-Fi signals into the city, each Link will have two USB charging ports and an Android tablet. Anyone can use the tablet for maps, web browsing, or to make phone calls using a Vonage app that will allow free calls to anywhere in the United States. There is also a prominent red 911 button for making free emergency calls. The main attraction—wireless internet—should run at gigabit speeds and be able to support hundreds of simultaneous users.

There are some practical security concerns, both for users and the equipment. As far as personal data is concerned, city officials have said there is a strict privacy policy and the network is encrypted. To prevent vandalism or theft, the tablets have especially scratch-resistant screens, and each Link is built into the ground through the existing payphone infrastructure. The kiosks have been designed to withstand extreme weather conditions. Only time will tell, but it should help that the kiosks have internal sensors to help understand how the structures hold up to any environmental impacts.

The project is being managed by CityBridge, a group of companies comprising experts in technology, user experience, connectivity and advertising that includes Qualcomm, Intersection, and CIVIQ Smartscapes. To support the new Wi-Fi network, CityBridge is spending $200 million to install hundreds of miles of new fiber optic cable that they say will deliver speeds up to 100 times faster than average public Wi-Fi.