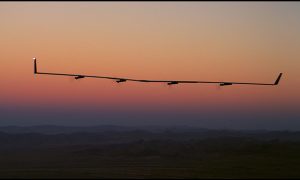 The first test flight with the unmanned drone took place in 2016 but resulted in a crash landing due to a structural failure caused by a combination of strong wind gusts and over correction upon landing.

The recently completed second test flight took place in Arizona and proved to be much more successful. Aquila spent a total of 46 minutes in the air and rose to an elevation of 3,000 feet. The drone weighs in at approximately 1,000 pounds and has a vastly longer wingspan than a Boeing 747. The drone functions mainly on autopilot, but there are crews on the ground who make certain to manage some of the many maneuvers the drone is capable of doing.

As big of a milestone that this is, Facebook founder Mark Zuckerberg continues to work toward his goal of providing internet connectivity to the world using a full fleet of drones that will fly together at 60,000 feet, stay aloft for months, and communicate with each other using lasers.

Since the first test flight, engineers have made improvements and the new drone is now equipped with more sensors, new spoilers, and a horizontal propeller stopping system enabling a better landing control. Watching the entire flight was an engineering team who had a live stream from a helicopter that was chasing the drone making sure the flight went smoothly. You can watch along here.

“We successfully gathered a lot of data to help us optimize Aquila’s efficiency,” Zuckerberg said on Facebook. “No one has ever built an unmanned airplane that will fly for months at a time, so we need to tune every detail to get this right.”