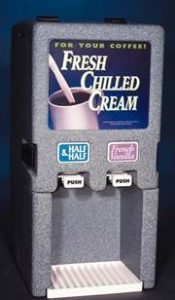 WhiteWave recalls CreaMiser refrigerated cream dispensers because a relay inside the creamer dispensers can overheat, posing a fire hazard. So far, seven incidents have been reported, including two fires at repair facilities and five units that had melted digital thermometers. No injuries have been reported.

The creamer dispensers are for commercial use and have model numbers 200, 210, and 400. They are made of black, gray, or tan plastic. Models 200 and 2010 have two creamer dispenser stations and model 400 has four. A white sticker or metal name plate on the back of the dispensers includes “CreaMiser Products Corporation,” along with model and serial numbers.

The recalled units were sold through distributors nationwide to commercial venues such as convenience stores and workplace cafeterias. They were sold from January 2001 through November 2003 for $990 for the two dispenser models and $1,235 for the four dispenser models. Owners should immediately unplug the recalled creamer dispensers, remove them from service, and contact CreaMiser for a free repair.

Learn more about the specific model numbers and identifiers by reading the official recall notice.