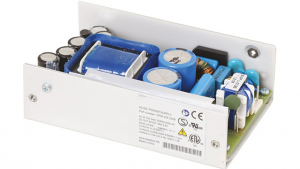 The new OFM225 with its 3 x 5” footprint and 1.5” height is designed for a continuous output power of 225W at natural convection and 40ºC ambient temperature, increasing to 325W continuous at 12 CFM forced air cooling. Several units can also be operated in parallel with load sharing. Intended for type BF applications, the unit can withstand 4000VAC from input to both output and ground, has a leakage current of <100μA, and meets class B EMC requirements.

Using Powerbox’ one step conversion topology, where power factor correction, isolation and regulation are combined in one conversion step, the component count stays below 120. This contributes to an efficiency of 93%, zero load power of500,000h. Over voltage protection, as well as over current and short circuit protection with auto recovery, adds to operational reliability which is further enhanced by intelligent over temperature protection regulating output power in the case of over temperature. In addition to increased life expectancy, this functionality increases the sustainability to short-term overload and reduces the risk of over temperature shut down.

With a nominal input voltage of 100-240V 50/60Hz and available output voltages of 12, 15 and 24VDC (12 and 15VDC to be released later this year) the new power supplies fit nicely into a large number of medical applications worldwide.