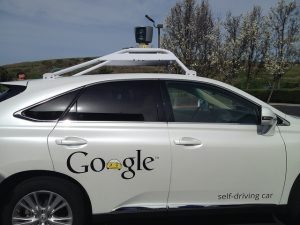 Google’s autonomous vehicle software just learned an unofficial rule of the road: public transit buses are not as friendly as your average car.  On Valentine’s Day, a self-driving Lexus RX450h hit a bus. Although autonomous vehicles have previously been involved in crashes, this is the first time that a Google car is at fault.

The accident happened when the self-driving car encountered some sand bags that surrounded a storm drain in its lane. The car pulled over to avoid the sand bags, and then when it attempted to move back into the center of the lane, a bus was approaching from behind. Both the vehicle’s software and its human test driver incorrectly assumed that the bus would let the car merge, so when the car inched back into the the lane (going two miles per hour), it hit the bus.

In a monthly report about the self-driving car project, Alphabet Inc.’s Google admitted partial responsibility for the incident.

This is a classic example of the negotiation that’s a normal part of driving – we’re all trying to predict each other’s movements. In this case, we clearly bear some responsibility, because if our car hadn’t moved there wouldn’t have been a collision.

Fortunately, both vehicles were moving slowly (the bus was traveling at 15 mile per hour) and there were no injuries, but the crash did damage the Google car’s left front fender, front wheel and a driver side sensor. Google is calling the incident a learning opportunity, and the project team members say that after reviewing thousands of simulations of the accident, the software has been updated. “Our cars will more deeply understand that buses and other large vehicles are less likely to yield to us than other types of vehicles, and we hope to handle situations like this more gracefully in the future,” Google’s report concluded.