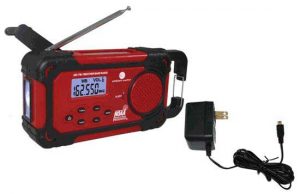 Ambient Weather recalled 12,500 weather radios in August 2015 because the radios can overheat when plugged into an AC power outlet, posing a fire hazard. Since then, the company is expanding the recall to include an additional 57,000 units, because there have been four new reports of smoke in the back battery area.

The recalled weather radios were sold at Grainger stores nationwide and online at Amazon.com and AmbientWeather.com from October 2012 through June 2014 for between $30 and $90. They are red and black, with “Ambient Weather,” “AM/FM/Weather Band Radio” and “NOAA Weather Radio” printed on the front of the radio. The radios have a black crank handle on the back, an antenna on the top, and LED flashlight on the left side, a clip on the right side and a cable to charge a smart phone. Accessories included an AC adapter, DC converter or solar panel charger.

Consumers should immediately stop using the recalled weather radios and contact Ambient Weather for a full refund. Consumers who received replacement AC power adapters in the previous recall are also included in this new recall.