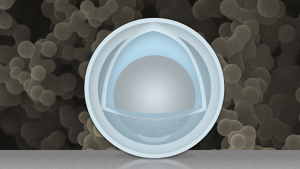 The gray “yolk” at center represents an aluminum nanoparticle, and the outer light-blue layer represents a solid shell of titanium dioxide. The background is a scanning electron microscope image of a collection of these yolk-shell nanoparticles.

One major flaw in rechargeable lithium-ion batteries is that they degrade after repeated cycles of charging and discharging. A team of researchers at MIT and Tsinghua University in China have developed a new “yolk-shell” nanoparticle that addresses this problem, leading to higher capacity and more power for batteries. This method stands out from other new research for improving battery technology because it is inexpensive and scalable.

The electrodes in batteries dramatically expand and shrink during each charging and discharging cycle, which can degrade the battery over time. Most lithium-ion batteries have anodes (the negative electrodes) made of graphite, but many researchers have been looking for more efficient materials, such as aluminum. It is an inexpensive high-capacity material, but previous attempts at aluminum anodes have struggled with a few challenging characteristics. At high capacity, aluminum expands and absorbs and shrinks, absorbing and releasing lithium in the process. This causes mechanical stress that can disconnect the electrical contacts. Additionally, when liquid electrolytes come in contact with aluminum, they decompose and form a skin called a solid-electrolyte interphase (SEI) layer, with particles that shed when the aluminum expands and contracts.

To avoid the problems that are caused by aluminum’s expansion and shrinking, the researchers designed a “yolk-shell” nanoparticle. Just like an egg shell protects a yolk, titanium oxide provides a solid buffer between the aluminum “yolk” and the liquid electrolyte between the battery’s electrodes. Space between the aluminum yolk and the titanium oxide shell (think of an egg white) allows the aluminum to expand and contract without stressing the surrounding materials, therefore minimizing the battery’s degradation.

The entire process is described in the journal Nature Communications. The researchers say the aluminum nanoparticle is close to being ready for real world applications, with inexpensive materials and a scalable process. MIT researcher Ju Li says, “it’s probably the best anode material available,” for applications that require a high power and energy-dense battery.