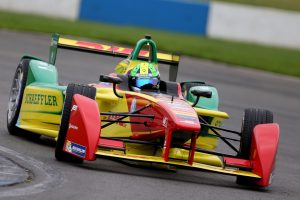 The second season of Formula E began with the first heat on 24 October 2015 in Peking. Team ABT Schaeffler Audi Sport (previously Audi Sport Abt Formula E Team), which is supported by Würth Elektronik eiSos, will be there too. The coming season is exciting not only as a sporting event, but also from a technological point of view: for the first time in Formula E, motors, gears and motor software can be built by different manufacturers. This means that sponsoring is headed toward the long-term objective of creating technological partnerships in which the company can provide valuable input for developing electronic components for eMobility – for example, for energy efficiency and thermal management.

“As developers and manufacturers of electronic and electro-mechanical components, eMobility for us is an important future market,” explain Oliver Konz and Thomas Schrott, CEOs of Würth Elektronik eiSos, their involvement in the new racing series. “Formula E is both an image campaign for eMobility and a test environment for improving technologies under extreme conditions.”

FIA has recognized Team ABT Schaeffler Audi Sport with its technology partners as a manufacturer. Standard-specification cars were driven during the first season, but this time, Daniel Abt and Lucas di Grassi will be driving the “ABT Schaeffler FE01.” Its core element is the “ABT Schaeffler MGU 01” electric motor. It has better torque and efficiency than its predecessor.