The World’s Smallest Integrated Optical Switch is Now Even Smaller 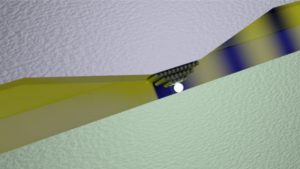 The switch is based on the voltage-induced displacement of one or more silver atoms in the narrow gap between a silver and a platinum plate. (Illustration: Alexandros Emboras / ETH Zurich)

Researchers at ETH Zurich have created an optical switch that defies logic by being smaller than the wavelength of the light that passes through it. It uses just one silver atom, which makes it the smallest optical switch in the world. This impossibly small switch is a modulator, a device that is used in photonic computing—a branch of technology which replaces conventional copper wires with optical components in order to quickly transfer large amounts of data. Modulators convert electronic signals into optical ones by turning a laser signal on or off at the frequency of the incoming electrical signals. Although they are usually only a few centimeters wide, data centers are filled with thousands of these modulators, so all together they are actually quite large, in terms of electronic components.

The researchers accomplished their breakthrough by building on work that was done just six months ago at the same institution, led by Jürg Leuthold. His team developed a micromodulator that measures just 10 micrometers across, which is an impressive 10,000 times smaller than today’s commercial modulators. Then the new research took Leuthold’s miniature version of a modulator and shrunk it down 1,000 times more. At the size of just one atom across, the switch is actually smaller than the light that passes through it.

Until recently, even I thought it was impossible for us to undercut this limit.

The new modulator is made out of two tiny pads—one silver and the other platinum—on top of a silicon optical waveguide. The pads are arranged just a few nanomaters apart, with a small bulge on the silver pad that protrudes enough to almost touch the platinum, leaving a space just about an atom thick between the two pads. When voltage is applied to the silver pad, a single silver atom (or sometimes a few more) causes a silver atom to relocate, which creates a short circuit between the two pads, so that electrical current flows between them. The researchers say this atom-sized switch can be turned on and off millions of times. 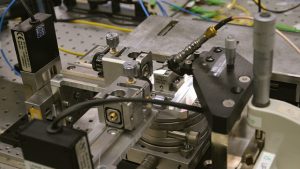 Set-up used in the lab to test the new type of switches. (Image: ETH Zurich/Peter Rüegg)

When a voltage is applied, the silver atom only has two options; it can either pass through the small opening or not. In effect, it creates digital signals comprising ones or zeros. “This allows us to create a digital switch, as with a transistor. We have been looking for a solution like this for a long time,” said Leuthold. The results of this research were recently published in the journal Nano Letters.