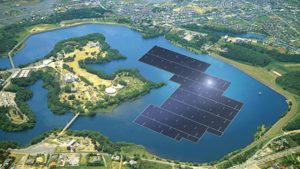 Japanese electronics manufacturer Kyocera has started building a floating solar power plant that should produce enough energy to replace 19,000 barrels of oil each year. Construction started in December 2015 and is expected to be complete by March of 2018. The massive photovoltaic (PV) power plant will comprise 51,000 solar modules that will float in a fresh water reservoir at Japan’s Yamakura Dam.

The solar modules are based on technology developed by a French company called Ciel & Terre. The patented floating solar PV platforms are made of high-density polyethylene, a common plastic. They are designed to be extra durable, with the ability to withstand high windspeeds and long-term UV exposure, while still being safe for drinking water.

Apparently, there isn’t enough open space left in Japan to support such a large solar power plant on land, so floating solar power plants like this one take advantage of large reservoirs that already exist for agricultural and flood-control purposes. Floating PV systems also have another advantage: they are better at handling earth quakes. Eva Pauly, international business manager at Ciel et Terre told National Geographic, “Earthquakes have no impacts on the floating photovoltaic system, which has no foundation and an adequate anchoring system that ensures its stability. That’s a big advantage in a country like Japan.”

The floating solar plant will have a capacity of 13.7 megawatts, which makes it the world’s largest floating PV power plant, in terms of output. It will generate an estimated 16,170 megawatt hours per year, which will be sold to Tokyo Electric Power Company. Kyocera estimates that this is enough electricity to power almost 5,000 typical households and offset 8,000 tons of CO2 emissions annually.