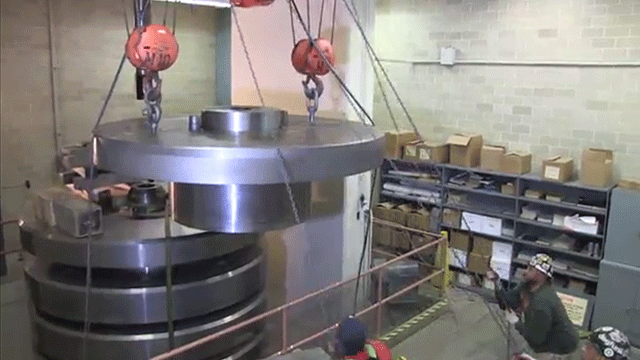 The world’s largest deadweight machine is being restored for the first time in 50 years. The National Institute of Technology’s 4.45-million newton (one million pounds-force) machine is being cleaned and recalibrated.

The machine was built in 1965 and includes a stack of 20 stainless steel disks that have an average mass of over 50,000 pounds each. It took several weeks to disassemble the weight stack because each piece had to be unbolted and then lifted with cranes and a pulley system. So far the top half of the three-story stack of weights has been dismantled and the weights are now being cleaned. Additionally, some of the surfaces within the weight stack are being restored by machining. Meanwhile, theorists are modeling the stack to gain a better understanding of the deflections that occur where stresses are highest.

The machine has been used to perform thousands of calibrations by U.S. aerospace manufacturers, U.S. military laboratories, and commercial force calibration labs.