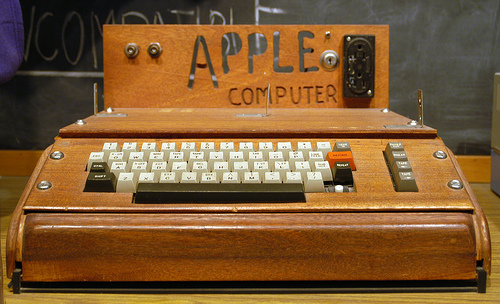 In case the environment, the law, or human health concerns aren’t enough to convince you to properly recycle your e-waste, consider this: your old gadgets could be worth hundreds of thousands of dollars. A recycling center in Silicon Valley is searching for a woman who dropped off a box of electronic waste that turned out to include a valuable piece of history.

Victor Gichun, the vice president of Clean Bay Area recycling center, said that he is trying to locate the woman, who likely had no idea that she had a collectable gadget when she dropped off a few boxes of electronics that she found while cleaning out her garage after her husband’s death. At the time, she declined to leave her contact information or take a tax receipt.

A few weeks later, the recycling center sorted the boxes and found the treasure: a rare first-generation desktop computer that was designed and assembled by Steve Wozniak in Steve Jobs’ family garage in 1976. Clean Bay Area sold the rare Apple 1 computer to a private collector for $200,000. Now they are looking for the woman who dropped it off so they can honor their standard policy of splitting half of the profits of electronic resale with donors. Gichun says he will recognize the lucky woman. “To prove who she is,” he said, “I just need to look at her.”