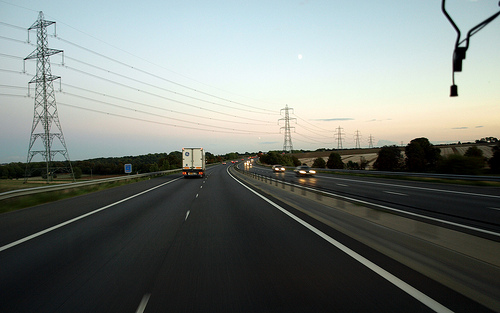 England’s roads are about to get greener. Highways England, the government-owned company that handles the country’s main roads, is proposing that a wireless power-transfer system be embedded into the streets so that electric and hybrid vehicles could charge without stopping. The company has already completed a feasibility study and is now asking companies to submit bids to host off-road trials to test how underground wireless technology would work on major roads.

As part of a long-term government plan for upgrading England’s roads, Highways England recently installed dozens of new vehicle charging stations and plans to make sure there are charging points every 20 miles along the highway. However, the chargers are usually in cities or larger towns and require drivers to stop and wait while their cars charge. Building a wireless charging system into the roads would help alleviate range anxiety and encourage more people to use electric vehicles, even for long trips to more remote destinations.

“The off road trials of wireless power technology will help to create a more sustainable road network for England and open up new opportunities for businesses that transport goods across the country,” said Highways England Chief Highways Engineer Mike Wilson, in a press statement. The government hopes that more convenient charging would encourage more electric vehicles and therefore help reduce fuel costs while also leading to better air quality and reduced noise levels for people living near highways.

The wireless vehicle charging system would be similar to technology that is already being tested at universities in the United States and South Korea. Magnetic charge plates or cables embedded in roads would generate electromagnetic fields that are picked up by a coil inside electric vehicles. This would enable inductive charging on the move.

Some industry experts have questioned whether the plan is realistic, citing cost as a major barrier. Highways England has suggested a plan for sending individual drivers a monthly bill, depending on the amount of electricity they use. The off-road tests will begin next year and last 18 months. If the technology is deemed safe and practical enough for widespread adoption, the next step will be an on-road trial. Ultimately, the plan would be to add the electric cables whenever the roads are already being repaved, in order to cut back on the costs and disruption to traffic that a major upgrade would entail.