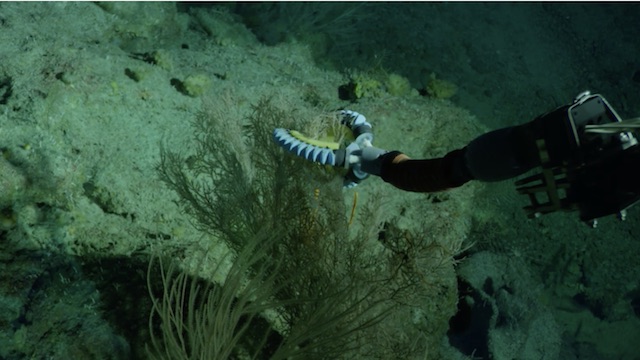 Researchers from Wyss Institute, Harvard’s John A. Paulson School of Engineer and Applied Sciences, the University of Road Island, and Baruch College have banded together to create a remarkable new type of submarine. They outfitted a glove with wireless soft sensors, allowing them to control a modular robotic arm. This soft robotic arm is capable of moving and flexing with a sensitivity and delicateness previously unseen in similar devices. Scientists believe this system could be a tremendous step forward in investigating more delicate aquatic life.

“This new soft robotic arm replaces the hard, rigid arms that come standard on most submersibles, enabling our soft robotic grippers to reach and interact with sea life with much greater ease across a variety of environments and allowing us to explore parts of the ocean that are currently understudied.”

The design involved gripping, rotary, and bending modules. These can easily be altered and added or removed as needed, allowing for the arm to be customized based on the task at hand. The soft arm possesses additional advantages over its stiff-armed predecessors. The hydraulic control system is far more compact and robust, making it able to withstand harsh underwater environments. Best of all, the entire new system uses less than half of the power of commercially available deep-sea electronic manipulator arms.

The submarine’s arm operates wirelessly. A glove outfitted with soft sensors is worn by a scientist. The scientist controls the arm by moving their own wrist and fingers. The movements cause assorted valves in the seawater-powered hydraulic engine to open and closed as needed. The grip on the device can be switched out depending on the specific needs of the research and the delicacy of the work. Scientists have compared the delicacy and sensitivity to that enjoyed by scuba divers exploring the ocean’s depths.

Early field testing of the system has proven to be extremely successful. The device was able to collect an assortment of delicate sea organisms without issue. The different modules were quickly and easily switched out depending on what was needed for the specific creatures.

Scientists will next work on refining and streamlining their design. They also hope to incorporate non-invasive DNA and RNA sampling capabilities. This would allow them to capture especially delicate sea life, perform experiments in a makeshift underwater laboratory, and then immediately release the creatures back into the wild.