Neurosurgeons and Engineers Developed Wireless Sensors that Dissolve in the Brain 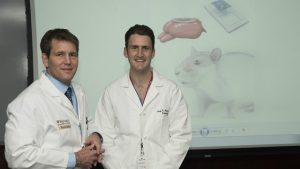 Neurosurgeons and engineers have teamed up to develop wireless sensors that monitor the brain and then dissolve when they are no longer needed. The tiny sensors can measure the brain’s temperature and pressure—an important indicator that doctors use to monitor patients with traumatic brain injuries. “Electronic devices and their biomedical applications are advancing rapidly,” said researcher Dr. Rory K. J. Murphy. “But a major hurdle has been that implants placed in the body often trigger an immune response, which can be problematic for patients.” The new sensors, however, naturally dissolve over time, they lower the risk of complications such as infection and there is no need for surgery to remove them.

The devices are made of polylactic-co-glycolic acid and silicone, and they are just about the size of a pencil tip. The researchers conducted tested to confirm that the sensors transmit accurate pressure and temperature readings, as well as additional biomarkers. To test how well they will dissolve in the brain, the researchers left the sensors in baths of saline solution that caused them to dissolve after a few days. Next, they tested the devices in the brains of laboratory rats, and now they are planning to test the technology in human volunteers.

In the future, the researchers plan to develop similar sensors that could dissolve after monitoring other organs. “The ultimate strategy is to have a device that you can place in the brain — or in other organs in the body — that is entirely implanted, intimately connected with the organ you want to monitor and can transmit signals wirelessly to provide information on the health of that organ, allowing doctors to intervene if necessary to prevent bigger problems,” Murphy said. “And then after the critical period that you actually want to monitor, it will dissolve away and disappear.”

The sensor was developed by researchers from the Washington University School of Medicine in St. Louis and the University of Illinois at Urbana-Champaign. Their findings are published in the journal Nature.