Wireless Power and the Future of Electronics

Scientists at Clemson’s Nanomaterials Institute are working on a new form of wireless power. Using a green energy source called triboelectricity, researchers believe they are drawing closer to the day that we can all bid goodbye to wire chargers.

Back in March of 2017, scientists unveiled a remarkably simple triboelectric nanogenerator named U-TENG. The tiny device was made of plastic and tape. How could such a creation manage to generate electricity? By harnessing the power of motions and vibrations. Two materials are brought together (like when you tap your feet on the ground or clap your hands together). These actions generate voltage which is detected through a wired, external circuit. The electrical energy generated through this action can then be stored in a capacitor or battery.

Fast forward nine months later, when scientists reveal that they have finally created a wireless TENG. Known as the W-TENG, this device relies on materials that are dramatically opposite in their affinity for electrons. This allows them to generate a voltage when they come into contact.The upgraded version saw plastic replaced with a multipart fiber made of graphene, as well as a biodegradable polymer called polylactic acid. Polylactic acid excels at separating positive and negative charges, but is only mediocre at conducting electricity. That’s where the graphene comes to the rescue. The tape was swapped out as well, this time for Teflon — yes, the same compound you find coating your favorite nonstick pans. 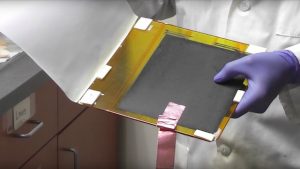 After assembling the components (and with a little help from a 3-D printer, scientists ended up with a truly remarkable device. The W-TENG can generate up to 3,000 volts of electricity. That’s enough to charge 25 standard electrical outlets. Due to the high voltage, the device generates its own electric field which can be sensed wirelessly. As if that isn’t impressive enough, the W-TENG’s electrical energy can be stored wirelessly as well in batteries and capacitors.

“It cannot only give you energy, but you can use the electric field also as an actuated remote. For example, you can tap the W-TENG and use its electric field as a ‘button’ to open your garage door, or you could activate a security system — all without a battery, passively and wirelessly.”

Sai Sunil Mallineni, the first author of the study and a Ph.D. student in physics and astronomy

The wireless applications for this sort of technology are virtually endless. Currently the scientists are working to patent their new creation. They are also meeting with industrial partners to begin the process of integrating W-TENG into a variety of useful energy applications.