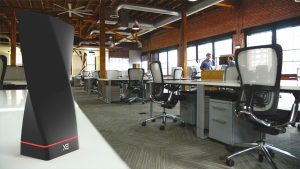 The race for wireless charging is on—the pad-based systems that are on the market today just aren’t good enough, so several tech startups are developing solutions work more like WiFi. The latest wireless charging product comes from TechNovator, a small company based out of Poland and Ukraine. The team of eight is launching a Kickstarter campaign in November to fund the first production run of their product, called XE. The system includes a phone case, a base tower, and an app.

The tower communicates with the special phone case via resonant inductive coupling—a method for wireless power transmission that Nikola Tesla first demonstrated with light bulbs back in 1894. The process involves transferring power between two magnetically coupled coils that operate in a resonant mode, tuned to the same frequency as each other.

In this instance, the XE base tower is plugged in and uses Bluetooth to scan the room to locate an XE case. Then the transmitter is aimed directly at the case to transfer power. To protect the phone’s battery from damage, power is first transferred to the case’s built-in battery. When the case is fully charged, it then transfers the power to the phone’s battery. This process repeats six or seven times until the phone is fully charged.

The tower will charge a phone as long as it is within 17 feet of the base tower. This gives a decent range which allows people to use their phones while they charge, which is certainly better than traditional wired charging or wireless charging pads. However, charging takes quite a bit longer—with a full charge of an iPhone 6 taking four hours (and, we would assume, even longer if you continue to use the phone during that time). The charging is fastest when the XE case is close to the base tower, so walking to the edge of the 17 foot radius will cause even slower charging. However, this wouldn’t be too inconvenient in an office setting.

Certainly, the convenience of wireless charging comes at a cost. While TechNovator hasn’t listed a price yet, Digital Trends reports that the system will cost somewhere in the $200 range. On top of the initial purchase, users will also spend more on their electric bills, since the base tower will be significantly more power hungry than a lightning cable.

XE is starting with cases for the iPhone 6 and the 6 plus, but the technology could eventually be incorporated into phones so that the case would be eliminated altogether. The product’s marketing materials include slick design concepts, but XE is still a messy prototype at this point.

There is plenty of competition for wireless charging for smartphones—with products from research groups and companies such as Energous, K3OPS, UBeam, and Ossia—just to name a few. But just like TechnoVator, nobody has gone from prototype to commercial product yet, so we’ll just have to wait to see which company captures the marketplace with a final design.