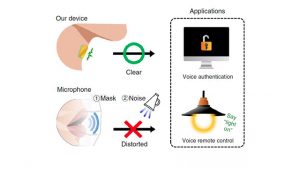 Researchers from Pohang University of Science & Technology (POSTECH) have created a flexible, wearable vibration response sensor that could help to improve voice recognition technology. The sensor is attached to the neck, allowing it to recognize and identify a specific voice thanks to the vibrations that travel through the skin of the neck. Unlike many other voice recognition devices, the volume of sound and ambient noise do not impact the device.

Traditional vibration sensors identify a voice with the help of vibrations in the air. Unfortunately, the sensitivity of such devices can be negatively impacted by the damping effect as well as mechanical resonance. This impedes their ability to quantitatively measure voices. This limits the accuracy of this sort of technology and has proven a significant roadblock in voice recognition technology.

Scientists think their new device could change that. They designed their vibration sensor based on the acceleration of skin vibration. The device was then constructed out of an ultrathin polymer film, as well as a diaphragm outfitted with a series of tiny holes. By measuring the skin vibrations that occur when a person speaks, the device can quantitatively sense voices. This technology has the added benefit of not being impacted by a noisy environment, or even masks covering the mouth, as the data comes directly from the vibrations in the neck.

Scientists next hope to extend their research even further into other voice-recognition applications. These include creating an electronic skin, wearable vocal healthcare monitoring technology, and advanced in human-machine interfacing. On the commercial front, this technology could prove a benefit to anyone who has ever had their smartphone accidentally call the wrong person, or had their voice recognition software turn on unintentionally.

For now, the researchers will continue to work on perfecting and streamlining their new technology, as well as exploring the various other applications that can benefit from their work.