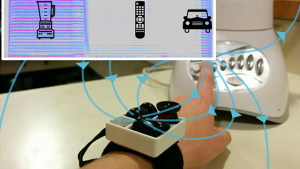 Future wearable technology will go from counting your footsteps to tracking your carbon footprint. Wearables started with basic fitness trackers, but the concept is expanding to include more complex tools, such as MagnifiSense, a new wearable device developed by engineers at the University of Washington. It provides detailed information by measuring the electromagnetic radiation that emanates from electronic products that a user interacts with throughout the day.

The new device’s sensors pick up the electromagnetic radiation from appliances, consumer electronics, and even trains and cars. It uses the unique electronic signatures generated by electrical components or motors to identify when a wearer interacts with these devices. It can measure a user’s carbon footprint by tracking when a user does anything from flipping a light switch to hopping on a train. The information it gathers could also be used to connect with smart home appliances; for example the sensor could communicate with a T.V. to display certain shows depending on the user’s age and habits. MagnifiSense could also be used to assist with elder care, by automatically turning off stoves or alerting care givers if the user’s behavior seems out of the ordinary.

The device is made of three simple, off-the-shelf sensors that use inductors, or coils of wire wound around magnets. The researchers found that this design was accurate without sacrificing too much power consumption (it had to be efficient enough to be practical). The sensors capture a wide frequency range, which allows them to decipher electromagnetic radiation emanating from the electronic components such as motors, rectifiers and modulators that are embedded in the gadgets, appliances, and vehicles that people interact with on a daily basis. To help interpret all this data, the team developed signal processing and machine learning algorithms that help the system identify which electromagnetic signals belong to each device.

Although Magnifisense performed well during initial tests—correctly identifying 94 percent of interactions with 12 common devices—improvements will be needed before the technology can be commercialized. Next, the researchers will work on getting the device to distinguish between a bunch of similar gadgets that are near each other. They will also work on miniaturizing the design so that the technology can be embedded into a watch or wristband.