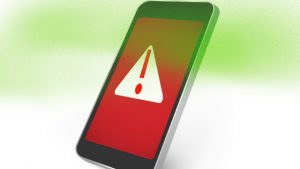 Just like civilians, soldiers already carry sophisticated wireless devices with them every day. New technology add-ons take advantage of the processing power of smartphones. Researchers from MIT and several other institutions have developed inexpensive sensors that could improve soldiers’ safety by detecting chemicals in the air.

The researchers say their device is as accurate as benchtop lab equipment even though it weighs less than a credit card and only costs a nickel to make. The gas detector is based on a circuit that is loaded with chemically-altered carbon nanotubes (CNTs). While CNTs are usually highly conductive, in this case they are wrapped in an insulating material that makes them highly resistive. The insulating material breaks apart when it is exposed to toxic gases, the nanotubes suddenly become 2,000 percent more conductive, and a signal is sent to a smartphone via nearfield communications technology.

The goal is to eventually design lightweight RFID tags and an accompanying app that can detect toxic gases. “But creating new cell phone apps is a little beyond us right now,” says Timothy Swager, the lead author on a paper describing the sensors that was published in the Journal of the American Chemical Society. “We’re chemists.”