Wearable Artificial Kidney Could Give Freedom to Dialysis Patients 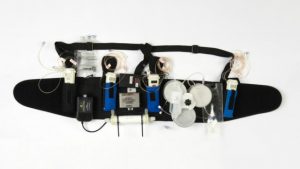 The results of a breakthrough clinical trial for a wearable artificial kidney device have now been released. The study was fast tracked as part of the Food and Drug Administration’s Innovation Pathway, a program that is designed to help bring emerging medical devices to market. The device that was tested isn’t perfect yet, but with some design improvements it could improve the quality of life for dialysis patients.

The research was conducted by a team from several institutions in Washington and California, including the University of Washington and Cedars-Sinai Medical Center, among others. The trial exposed some flaws in the device, but it still served as proof of concept that a wearable artificial kidney device is both achievable and desirable. The study is described in a paper titled “A wearable artificial kidney for patients with end-stage renal disease,” which published in the journal JCI Insight on June 2, 2016.

People with healthy kidneys walk around while their organs naturally clean their blood. But some medical conditions lead to kidney failure, which is treated with hemodialysis, an artificial process of removing waste and unwanted water from the blood. These patients must go to medical facilities for treatment three times per week, where they sit still for hours at a time while being hooked up to large machines. The wearable artificial kidney puts miniature components and a battery on a tool belt so that patients still reap the same benefits as traditional dialysis, but with the freedom to walk around.

A wearable device would allow patients to get treatment in the comfort of their own homes (or wherever they’d like to travel), while being mobile and untethered. The results of the trial showed that the wearable version effectively cleared the blood of waste products and patients reported much greater satisfaction with the overall process. Unfortunately, the trial had to be cut short due to technical problems with the device which the researchers described as “excessive carbon dioxide bubbles in the dialysate circuit and variable blood and dialysate flows.” Still, if the design can be improved then a wearable kidney device could make a standard medical treatment much more comfortable for many patients.