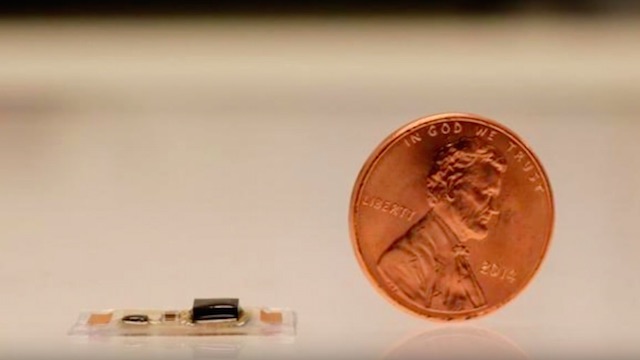 Sensors have typically been large, clunky things. Sure they can track body stats and environmental data, but they’re unwieldy and often inconvenient for daily life. Luckily the trend of smaller and more lightweight technology has finally reached sensors, which are now adaptable, wearable, and more effective than ever before.

A team of scientists from the University of Colorado Boulder and Northwestern University have created a new type of sensor with amazing properties. This soft and wearable design allows for greater mobility and ease of use. But perhaps the most impressive design aspect is how the sensor receives data: through acoustic vibrations of the human body, it can provide detailed reports on everything from a human heartbeat to erratic breathing.

The sensor picks up on vibrations from the body and deciphers the data accordingly; it can even recognize verbal commands from the wearer. The device is stretchable and can be easily attached to almost any patch of human skin for comfortable and effective wear. It looks deceptively similar to a band-aid, while having properties that could revolutionize the medical field.

Scientists behind the sensor have described it as a ‘tiny, wearable stethoscope,’ but its capabilities go much further than that. Devised from a stretchable polymer blend, the sensor is continuously picking up physiological data and recording any irregularities in the human body under surveillance. The acoustics are so sensitive they can even pick up gastrointestinal noises and other subtle vibrations that could represent potential health concerns.

Additionally, the sensor be integrated with other medical devices for even more comprehensive data-gathering. By connecting it to electrodes, the wearable sensor can record electrocardiogram and electromyogram signals. Scientists are working on a wireless device that will allow people to wear the sensor even in remote or noisy locations. Further developments could lead the sensor to be of help to those suffering from speech impediments or send instant alerts to doctors when their patients begin to suffer serious medical issues. Sensors have long been a part of the medical technology field — but never quite like this.