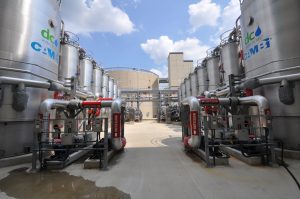 Washington D.C.’s water treatment plant—the largest consumer of electricity in nation’s capital—is now converting sewage sludge into clean energy. A new system which launched in September slashes the plant’s carbon footprint by a third and saves millions of dollars in electric costs. After the District’s wastewater has been treated, the leftover solids are further processed through a thermal hydrolysis system to generate methane gas which powers turbines.

Norwegian company Cambi AS built the system over the last four years. It is the largest thermal hydrolysis setup in the world. Previously, the District of Columbia Water and Sewer Authority spent $12 million per year on chemically treating the leftover solids (a.k.a. poop) and then trucking them out of the city. Now, they send the sludge through a giant pressure cooker instead. High heat and pressure helps to weaken the solids so that microbes can easily digest them and produce methane. This gas is captured and fed back into three large turbines that produce electricity.

The system is expected to produce a constant stream of 13 megawatts of electricity, which is equal to a third of the entire plant’s operation. Although the system cost $470 million to build, the Water and Sewer Authority will save $10 million per year on electricity alone. Additionally, another $11 million in trucking expenses and $2 million in chemical treatment with be saved each year because there is less solid waste to remove. As a bonus, the system even sterilizes the leftover solids which are now being used as compost in urban gardens and green infrastructure projects around the District.

This project embodies a shift from treating used water as waste to leveraging it as a resource. We are proud to be the first to bring this innovation to North America for the benefit of our ratepayers, the industry and the environment.