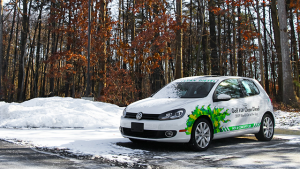 “I personally am deeply sorry that we have broken the trust of our customers and the public,” wrote Volkwagen C.E.O. Dr. Martin Winterkorn, in a statement released on Sunday. The German automaker is accused of using illegal software to cheat emissions tests in the United States. If VW is proven to have intentionally deceived regulators, the company will face serious consequences, including $18 billion in fines and criminal prosecution. No matter how the investigation turns out, significant damage has already been done to the brand’s reputation, with a class action lawsuit in the works and stocks plummeting 20 percent on Monday.

The Environmental Protection Agency is charging VW of using emissions control software to make their diesel-powered cars appear cleaner than they actually are. The software is considered a “defeat device,” as defined by the Clean Air Act. Allegedly, algorithms turn on full emissions control during testing, but then the controls switch off so the car can perform better in real world driving situations. Consequently, the cars pass emissions tests but then they hit the roads with as much as 40 times the allowable diesel pollution. Reuters reported that Robert Bosch supplies the emissions control devices to VW, although this hasn’t been confirmed.

The controversy surrounds TDI “clean diesel” cars, which were marketed as being nearly as fuel-efficient and environmentally friendly as hybrids. The EPA says the illegal software was installed in 482,000 VW and Audi cars, including certain 2009-2015 models of the VW Jetta, Beetle, Golf, Passat and Audi A3. Volkswagen has already suspended sales of all vehicles equipped with the software, and a recall is inevitable.

“Using a defeat device in cars to evade clean air standards is illegal and a threat to public health,” said Cynthia Giles, Assistant Administrator for the Office of Enforcement and Compliance Assurance. Volkswagen has previously denied intentionally cheating and blamed high emissions readings on technical issues. However, when the EPA threatened to withhold certification for 2016 models, VW admitted it had designed and installed a defeat device.

We will cooperate fully with the responsible agencies, with transparency and urgency, to clearly, openly, and completely establish all of the facts of this case.

In his apology on behalf of VW, Winterkorn promised to move forward with full cooperation, transparency and urgency. The EPA issued a notice of violation (NOV) of the Clean Air Act on Friday (September 18), and California is separately issuing an In-Use Compliance letter to Volkswagen.