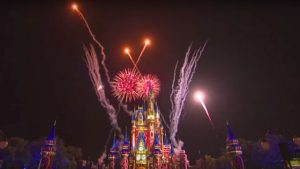 Scientists at Disney Research have created an innovative new way for people to ‘feel’ fireworks.  This technology will prove a huge benefit to Disney’s visually impaired fans, who will finally be able to experience the fun and excitement of a spectacular fireworks display. Additionally, this technology could have a variety of other applications that could prove of great benefit to the blind and visually impaired community.

The tactile pyrotechnic display, called ‘Feeling Fireworks,’ relies on haptic feedback to provide this singular experience. Through a series of tactile vibrations, fans will get the sensory impact of witnessing a fireworks display the likes of which only Disney can create.

The experience is fairly cost effective, and delightfully interactive. It employs streams of water for a more tactile experience of the fireworks, as well as a series of vibrations. A Microsoft Kinect camera setup follows the movements of the user so the technology can adapt accordingly. An Arduino computer controls the water jet sprays, making sure the timing and levels are perfect. The sprays draw out the corresponding images and shapes of the fireworks onto a latex screen. Users can then feel the designs through the surface of the screen. The image is simultaneously matched with a projector, resulting in a wonderfully 3-D experience.

Feeling Fireworks is still in the prototype phase, but early testing has been very encouraging. In a study with 18 sighted participants, the success rate came in at a solid 66%. Although scientists and researchers have been tight-lipped about the specifics behind the project,including when it can be expected to appear in parks, they did offer a few hints at additional technologies that could be utilized to make the experience even more memorable. The screen could double as a tactile-visual musical experience for deaf fans, to offer a more immersive fireworks experience.

These are big steps forward for haptics technology. These innovations can go a long way in enhancing the lives of the visually impaired, from entertainment to health-related devices. There are even shoes that are being designed to vibrate, providing a sort of physical guide for the visually impaired. It may be some time before Feeling Fireworks makes its grand debut, but it’s definitely going to be an unforgettable Disney experience.