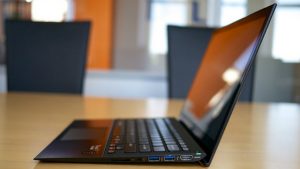 Vaio, the personal computer (PC) company that spun off from Sony two years ago, is now discussing a merger with the PC divisions at Toshiba and Fujitsu. The merger could create a PC company that would be big enough to rival NEC Lenovo, which currently handles 29 percent of Japan’s PC shipments.

Vaio would own the biggest stake in the newly-merged company, although the new company could be branded under any name. The consolidation of PC companies is becoming a trend as PC makers are adjusting to a marketplace where the popularity of smartphones and tablets is contributing to shrinking sales and profit margins.

Hidemi Moue, the chief executive officer of Japan Industrial Partners which owns Vaio, told Bloomberg that he expects to finalize a deal with Toshiba and Fujitsu by the end of March. “The PC market is shrinking, which means there are merits in working together to make the most of research, production volumes and marketing channels,” he said. “We can do it with minimal cannibalization.”