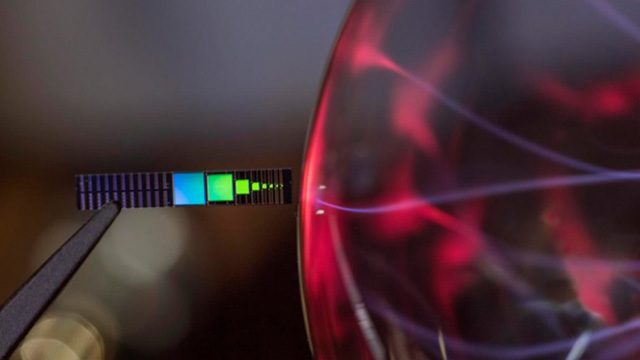 Researchers from Sandia National Laboratories have invented a new way to harness waste heat and convert it into usable DC power. This tiny silicon-based device can take the heat, or waste energy, from a device and transform it into DC power. Scientists believe that this work could tap into a potential source of clean, natural energy.

“We have developed a new method for essentially recovering energy from waste heat. Car engines produce a lot of heat and that heat is just waste, right? So imagine if you could convert that engine heat into electrical power for a hybrid car. This is the first step in that direction, but much more work needs to be done.”

Paul Davids, physicist and principal investigator for the study

For all the power it could generate, the device created by scientists is remarkably small.  The silicon-based device is roughly 1/8″ x 1/8″, and about half as thick as a dime. The top of the device is comprised of aluminum that has been cut through with stripes. The stripes are approximately 20 times smaller than the width of a single human hair. This tiny pattern acts as an antenna for the device, and as is used to pick up infrared radiation.

The bottom of the device is made of silicon. The top and bottom layers are divided by an extremely thin layer of silicon dioxide. Roughly 20 silicon atoms thick, this layer is where the antenna channels all the infrared radiation. Once the infrared radiation is trapped in the silicon dioxide layer, it it creates electrical oscillations that run at about 50 trillion times per second. The oscillations move the electrons back and forth between the silicon and aluminum. Known as rectification, this process results in net DC electrical current.

The device has been dubbed as an ‘infrared rectenna.’ The name comes from the term ‘rectifying antenna.’ The solid-state device has no moving parts so there is no concern about any moving pieces breaking or wearing out. Additionally, the device does not need to directly touch the heat source to create DC electrical current. This means the device won’t wear down due to thermal stress.

The infrared rectenna was made using the same processes as those implemented in the integrated circuit community. That makes the device easily scalable for commercialization. While powering everything from hybrid cars to space rockets is on the scientist’s agenda, for now they will work on streamlining their device for efficiency and durability.