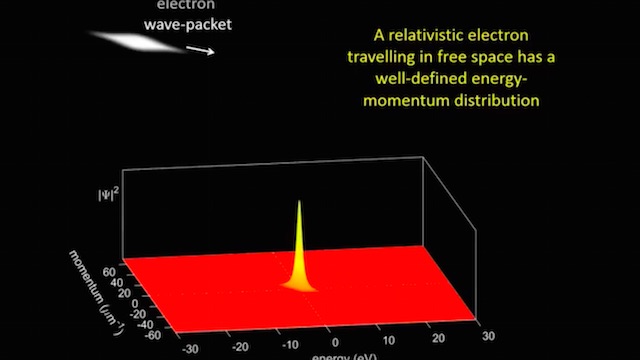 Scientists from EPFL in coordination with an international array of researchers have used ultrafast Transmissions Electron Microscopy in order to take attosecond energy-momentum resolved snapshots of the free-electron wave function. Additionally, the scientists used this success to develop a theory regarding the creation of electron flashes within zeptosecond timeframes. Scientists believe their work could help physicists to increase the energy yield of nuclear reactions thanks to coherent control methods. This technology could dramatically impact the fields of laser cooling, spectroscopy, and quantum processing.

This experiment has revealed a rare physics phenomena: the excitation of an atom’s nucleus by absorption of an electron. Known as NEEC (nuclear excitation by electron capture), this process was theoretically predicted over 40 years ago. But the technology to prove this has only recently been available.

That all changed in February of 2018, when physicists successfully caught a glimpse of NEEC under laboratory settings. Using this research, EPFL scientists believe that there is a way to potentially exploit the several orders of magnitude in energy harvesting. It can also help to explain the abundance of certain elements in the universe, and why others are so rare.

“Ideally, one would like to induce instabilities in an otherwise stable or metastable nucleus to prompt energy-producing decays, or to generate radiation. However, accessing nuclei is difficult and energetically costly because of the protective shell of electrons surrounding it.””

The energy harvesting potential in this research could be massive. Based on the energy that is possibly present in the nucleus of an atom thanks to the coherent control of the NEEC effect. This method would be made possible through the availability of ultrashort electron flashes.

The concept of controlling nuclear phenomena via external parameters is a rapidly expanding area of study. Scientists will next attempt to induce instabilities in a nucleus that is otherwise stable or metastable. Such a move could result in energy-producing decays or even generate radiation. Unfortunately, accessing nuclei can be both difficult and energetically costly. Therefore the external parameters have little to no impact on decay rates or nuclear properties in general. The researchers believe that their work offers new insights into the control of nuclear reactions, with significant implications in a variety of different fields.