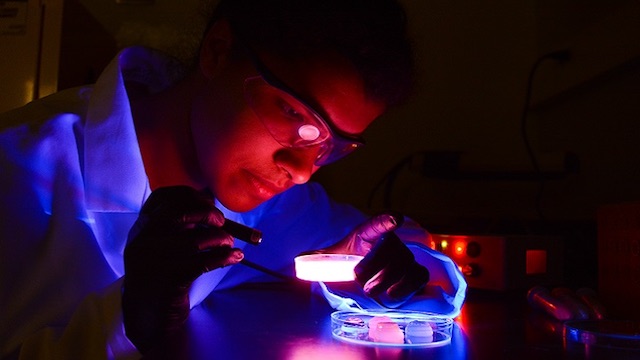 Researchers from Hiroshima University, the National Institute of Information and Communications Technology, and Panasonic Corporation have banded together to develop a terahertz (THz) transceiver capable of transmitting or receiving digital data at 80 gigabits per second. Scientists believe that this technology will help lend itself to ultrahigh-speed wireless communications in the near future.

Scientists have long suspected that the THz band could be the next wave of ultrahigh-speed wireless communications. And it looks like that is becoming a reality, as researchers have developed a single-chip transceiver capable of reaching a communication speed of 80 gigabits per second. The group behind this discovery also previously created a 300-gigahertz-band transmitter chip that has the ability to achieve 105 Gbits/s, as well as a receiver chip that can reach 32 Gbits/s And now this work has been combined into one cohesive unit: a single transceiver chip.

“We presented a CMOS transmitter that could do 105 Gbit/s in 2017, but the performance of receivers we developed, or anybody else did for that matter, were way behind for a reason. We can use a technique called ‘power combining’ in transmitters for performance boosting, but the same technique cannot be applied to receivers. An ultrafast transmitter is useless unless an equally fast receiver is available. We have finally managed to bring the CMOS receiver performance close to 100 Gbit/s.”

Scientists believe this work will have a lot of significant applications going forward. Some researchers think it could help pave the way for artificial super-intelligence; but others believe this could have a much more important impact — namely, allowing scientists to keep up with the ever-accelerating need for technological advancement.

This new innovation does both. It potentially provides scientists with advances in computational power as well as communication speed and capacity within computers. And, perhaps most significantly, it is an important step forward in the quest for singularity. But scientists are quick to point out that achieving singularity is a lengthy process, and not one that will magically appear overnight.

“After all, singularity is a self-fulfilling prophecy,” explained Professor Fujishima. “It’s not something some genius out there will make happen all of a sudden. It will be a distant outcome of what we develop today and tomorrow.”