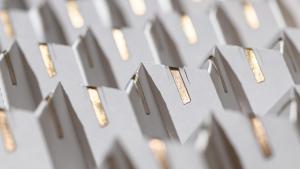 Scientists from the Georgia Institute of Technology have developed a system that uses an origami-inspired structure to create radio frequency filters with adjustable dimensions. This technology will allow devices to alter which signals they block over a wide range of frequencies.

Researchers relied on a specific pattern of origami known as Miura-Ori. This particular design has the ability to grow and shrink in a manner similar to an accordion — a trait the scientists were particularly eager to take advantage of.

“The Miura-Ori pattern has an infinite number of possible positions along its range of extension from fully compressed to fully expanded. A spatial filter made in this fashion can achieve similar versatility, changing which frequency it blocks as the filter is compressed or expanded.”

Glaucio Paulino, the Raymond Allen Jones Chair of Engineering and a professor in the Georgia Tech School of Civil and Environmental Engineering

Scientists took a printer capable of scoring paper, which allowed them to fold the sheet into the required origami pattern. Next, an inkjet-style printer applied lines of silver ink across the cuts in the paper. As a result, dipole elements form which allow the object to have the ability to filter different radio frequencies.

The dipoles must be strategically placed along the fold lines. When they are pressed together as the paper is folded, their resonant frequency shifts higher along the spectrum.

It’s important that the dipoles do not break during the folding process, so the perforations on the paper were suspended at the location of the silver elements before continuing on the other side. In another protective move, a separate cut is made along each dipole to allow for a bridge to form that would make the silver bend more gradually.

Researchers discovered that their new invention was able to block a narrow band of frequencies. If they took the design and stacked them, they could block a wide band of different frequencies. The unique shape and design of the formation means it would adapt well to systems in compact spaces, such as antennas.

Experts believe this new technology could have a wide range of applications in numerous fields. It could be used to create antenna systems that can adapt to ambient conditions in real time, as well as for designing electromagnetic cloaking systems capable of altering quickly to reflect or absorb different frequencies as needed.