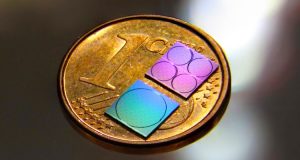 Engineers from EPFL have successfully demonstrated a laser-based microwave generator using integrated photonic chips. This new technology could have a plethora of useful applications, and may one day be used in 5G wireless networks, radars, and satellite communications.

In order to achieve this feat, scientists had to dramatically lower the optical losses of the photonic waveguides. These waveguides are based on silicon nitride, which was manufactured with the lowest loss in any photonic integrated circuit. With the help of this technology, engineers created coherent soliton pulses with repetition rates in the X-band and the microwave K-band.

The microwave signals that emerged from this experiment were equipped with feature phase noise properties. These properties were found to be equal with if not lower than those properties found in standard electronic microwave synthesizers.

The level of optical losses achieved by EPFL engineers is low enough so that light can generate nearly one meter in a waveguide that is just one micrometer in diameter.

While the loss level remains over three times higher than that found in optical fibers, this still is a significant success for the EPFL team. Their integrated nonlinear photonics represents the lowest found within the tightly confined waveguides.

“These microcombs, and their microwave signals, could be critical elements for building fully integrated low-noise microwave oscillators for future architectures of radars and information networks.”

But the EPFL team isn’t content to rest on its laurels. Experts are already working closely with collaborators in the United States. They hope to create hybrid-integrated soliton microcomb modules capable of combining chip-scale semiconductor lasers. This technology could prove useful in applications such as spectroscopy, transceivers in datacenters, microwave photonics, optical coherence tomography, compact optical atomic clocks, LiDAR, and much more.