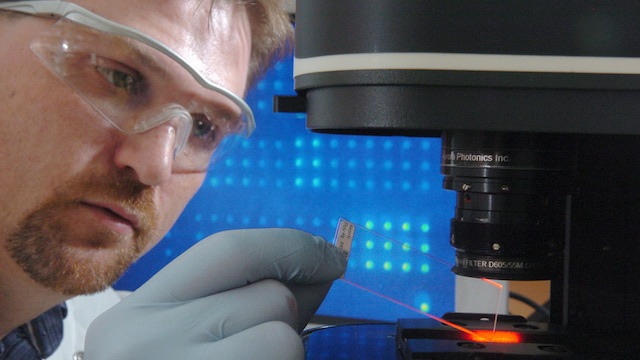 Scientists at the University of Delaware have invented a new type of technology to improve the communication between photonics devices. Researchers believe that this new innovation could significantly benefit smartphones, laptops, and assorted other consumer electronics.

Scientists have successfully created a silicon-graphene device capable of transmitting radio-frequency waves at less than a picosecond at a sub-terahertz bandwidth. Silicon has long been a popular material for use in semiconductors found in many electronic devices. Unfortunately, there is a limit to what silicon can do in a semiconductor, due to its carrier mobility. This means that the speed a charge moves through the material, and its indirect bandgap, can dramatically limit the material’s ability to absorb and release light.

But scientists believe they’ve found a solution to this conundrum, in the form of graphene. This 2D material is made up of just a single layer of atoms, and has a better carrier mobility, as well as a direct bandgap. That means it is capable of faster electron transmission, as well as improved optical and electrical properties. Scientists combined graphene with silicon, and were more than impressed by the resulting speeds of their experiments.

The first challenge with this work involved combining graphene and silicon. Scientists took the graphene and placed it in an interface between the materials, which is known as a p-i-n junction. This allowed researchers to optimize the structure of the material, which in turn significantly improved the speed and responsivity of the devices.

The entire process occurs on a wafer that’s just 12-inches in length, and incredibly thin. The components in the technology are also remarkably small, coming in at less than a millimeter in size. The components were easily fabricated, and could be commercialized with relative ease — which could prove a significant advantage when it comes to improving the speed of smartphones, tablets, and other consumer devices.

Scientists believe that their work has numerous applications in a variety of different fields. Silicon and graphene, when combined, could be used to create a photodetector that can create currents and detect light, while simultaneously offering more bandwidth and a distinctly lower response time than those found in current models. Researchers are currently looking for new ways to expand the applications of their new material, and investigating more components that have a similar structure.