Using Energy From The Heart To Charge Medical Devices 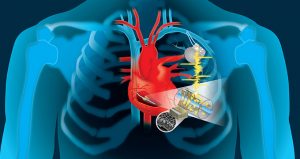 Illustration by Patricio Sarzosa, Thayer School of Engineering at Dartmouth

Scientists from Dartmouth University have constructed a new method for taking kinetic energy from the human heart and converting it into electricity to power implantable medical devices. Scientists believe this could dramatically change the medical industry, and help reduce the number of risky surgeries people must undergo for heart-related concerns.

“We’re trying to solve the ultimate problem for any implantable biomedical device. How do you create an effective energy source so the device will do its job during the entire life span of the patient, without the need for surgery to replace the battery?”

To achieve this goal, scientists have worked to modify pacemakers so that they can harness the kinetic energy of the lead wire that appears in all models. A dime-sized device is attached to the pacemaker, which converts the kinetic energy into electricity, which will continually charge the batteries.

The device is made up of a thin polymer piezoelectric film (PVDF). When this material is designed with porous structures, such as a flexible cantilever or an assortment of small buckle beams — it can take even the smallest amount of mechanical motion and turn it into electricity. The modules, which are adaptable and can be made multi-functional in the future, have the ability to be used as sensors. These sensors could collect data about a patient’s medical condition in real time and directly transmit it back to medical professionals. The sensors could even potentially warn about medical emergencies, and help save lives.

The next step for scientists is to complete the pre-clinical process. Next, they will attempt to obtain regulatory access approval. If all goes according to plan and there are no unforeseen complications, we could see approval for a self-charging pacemaker as soon as five years from now. The first round of animal studies has already been completed, and the results will soon be made available by the team.

According to scientists, there is already a large amount of interest in this device from major medical companies, and it’s not hard to see why. Scientists are studying the business and technology transfer skills necessary to make the entrepreneurial moves to turn their dream of a self-charging pacemaker into a reality.