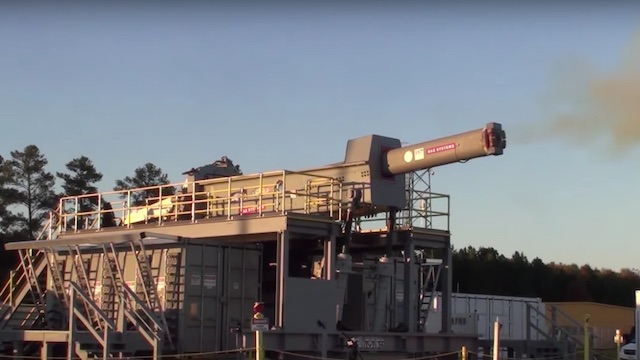 Back in 2012, the military announced its first electromagnetic cannon. People were understandably excited and impressed by this leap forward in modern warfare technology. However, things didn’t go quite as planned regarding this new armament. Although the cannon itself worked perfectly, there were a plethora of unforeseen issues that plagued attempts to use it regularly. The gigantic energy requirements alone were enough to stop the invention in its tracks (to say nothing of an assortment of other complications). But the military was unwilling to let this idea go, and now — five years later — they’re once again demonstrating just the sort of firepower they really have.

The U.S. Navy’s railgun is back and better than ever in a recently released video that shows the electromagnetic cannon firing shots from an assortment of different angles. The video was taken back in November of 2016, and the footage makes it clear that quite a few problems have been dealt with in the intervening years. The railgun fires quickly and effectively from every conceivable angle with an astonishing amount of firepower.

According to the official fact sheet, the gun operates by creating magnetic fields with high electrical currents that accelerate a sliding metal conductor. The conductor moves between two rails, sending out ammunition at up to 4,500 MPH. Ideally, electricity generated by the ship would power the railgun, but that has proven easier said than done. The railgun requires an enormous amount of energy to function, a problem engineers are reportedly still working on. This leads directly into the other big problem with these impressive weapons: getting them to cool down sufficiently after firing. The extreme heat that comes from so much energy being used can prove downright dangerous for the equipment and users alike.