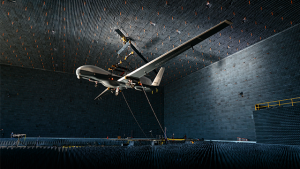 Earlier this month, an unmanned aircraft was tested inside an anechoic chamber while it was controlled by an external ground control station. The MQ-4C Triton is currently undergoing electromagnetic compatibility (EMC) testing at the Naval Electromagnetic Radiation Facility in Patuxent River, Maryland. The powerful aircraft was recently tested inside Patuxent’s test chamber, which is specifically designed for military sized aircraft and helicopters.

The Triton is being developed for the U.S. Navy by Northrop Grumman as part of the Broad Area Maritime Surveillance (BAMS) program for surveillance and reconnaissance over oceans and coastlines. This autonomous aircraft, or drone, can fly for more than 24 hours at a time, with an operational range of 8,2000 nautical miles. It will be equipped with a rotating radar array that operates in the X-band and provides a 360-degree view of its surroundings. The radar can see in every direction at great distances, but can also be used in “inverse synthetic aperture” mode to shoot a focused beam of energy to get a closer look at a small target hundreds of miles away. Many of Triton’s key functions, such as navigation, are automated, but the information that Triton gathers will also be sent to a ground station where sailors can interpret the data.

The recent tests in the anechoic chamber are just the beginning. Engineers will continue with thorough EMC testing over the next few months to verify that the aircraft’s subsystems can operate without interfering with each other.