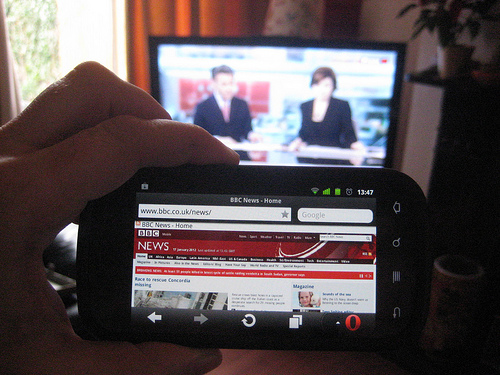 To demonstrate that wireless service providers can use the ultra high frequency (UHF) spectrum without interfering with television broadcasters, engineers at Rice University developed a technology for transmitting data over active TV channels. Consumers are now using more data and watching less live TV, but the UHF spectrum is still reserved for TV broadcasters. Although TV gets priority, the Federal Communications Commission (FCC) also allows secondary users to share the spectrum by transmitting data in the “white space” gaps between channels. The UHF band from 400 to 700 megahertz provides better signal range and penetration than higher frequency bands, so these networks are nicknamed “super Wi-Fi” for their superior coverage.

Rice electrical and computing engineering professor Edward Knightly and graduate student Xu Zhang say that there aren’t enough available white spaces and the UHF spectrum is underutilized, especially now that the way people watch TV has changed. People only used to watch live broadcasts, but now consumers also use DVRs, on demand, and stream shows online. In fact, a recent “state of the internet” study found that millennials only spend 41% of their TV time watching live broadcasts. Meanwhile, Knightly said, “Demand for mobile data services is expected to grow tenfold in the next five years, and the UHF band is perfectly suited for wireless data.”

To solve this discrepancy, the researchers developed technology for spectrum sharing called “Wi-Fi in Active TV Channels,” or WATCH, and recently demonstrated it with FCC approval. The system doesn’t require any changes to existing TV transmitters, but it does add a fraction of a second to the time it takes to switch between channels. Television is broadcast as normal, while the WATCH system ensures that the data transfer doesn’t interfere with TV reception, and TV doesn’t interfere with Wi-Fi signals. The system uses signal-canceling techniques to insert wireless data transmissions without interfering with TV reception. An app turns a user’s smartphone into a remote that informs the system whenever a nearby TV is tuned to a channel. WATCH then automatically shifts data transmissions to a part of the UHF spectrum that isn’t being used.

In lab tests, the researchers found that WATCH could provide at least six times more wireless data than traditional white space Wi-Fi. “Allowing the UHF spectrum to be inefficiently used makes little sense today and will make even less sense in the future,” Knightly said. “There are already more people in the United States who require mobile data services than there are people using broadcast-only TV. By showing that these two communities can coexist, we hope to spur innovation and a public debate about how this valuable resource could be used.”