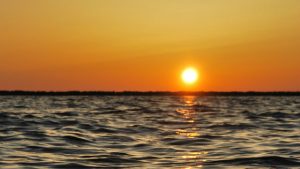 Engineers at Stanford University have set a new record for solar energy output under water. They have improved the performance of solar cells that will be used to convert captured greenhouse gases into fuel. This is an important breakthrough in the emerging field known as artificial photosynthesis, a chemical process that replicates the natural process that plants use to converts sunlight, water, and carbon dioxide into carbohydrates and oxygen.

Previous work on artificial photosynthesis has struggled with two main challenges: solar cells normally corrode under water, and even waterproof cells couldn’t capture enough sunlight under water. This new work, published in Nature Materials, was led by Stanford materials scientist Paul McIntyre, whose lab made solar cells resistant to corrosion in water four years ago. Now, the researchers have improved the design in order to make the cells more powerful. To do this, the added a layer of charged silicon between several layers of various materials, each with different electronic functions. The ultimate goal is to funnel greenhouse gases from smokestacks or the atmosphere into large tanks where solar cells inside would spur chemical reactions to turn the greenhouse gases and water into fuel.

Within five years, we will have complete artificial photosynthesis systems that convert greenhouse gases into fuel.