Uncovering The Wave-Bending Properties of Metamaterials 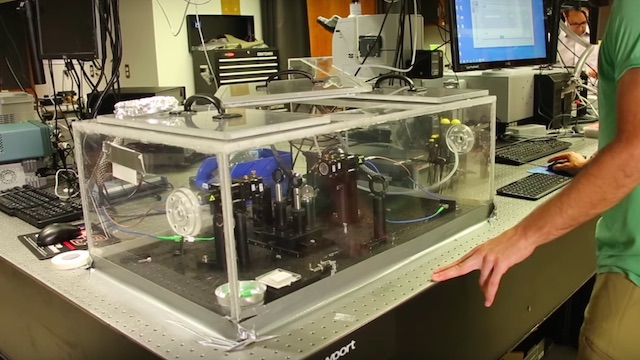 Duke’s Center for Metamaterial and Integrated Plasmonics (CMIP) was founded in 2009, and ever since it’s been leading the field for unique and fascinating research. In particular, scientists have been focusing on using metamaterials to control waves. From water waves to electromagnetic frequencies and sound waves, experts are exploring how all of these can be manipulated with metamaterials.

“There are a lot of ways to control waves, many of which weren’t thought of before or really exploited. Metamaterials has given us a way to manage waves in a way that is really unprecedented.”

Some scientists at Duke are focusing their efforts on the smallest scale of wavelengths. Professor Willie Padilla is studying the dynamics of terahertz frequencies. These frequencies lie between microwaves and infrared on the electromagnetic spectrum. The terahertz regime has largely been ignored by science, simply because it’s difficult to manipulate.

Devices that rely on radio and microwave waves work thanks to electrons, while photons power optical and infrared devices. Unfortunately, the further away these photons and electrons are on the electromagnetic spectrum from these devices’ comfort zone, the harder it is for said devices to work effectively. However, in between these two frequencies is the terahertz range.

Scientists believe that terahertz waves have the potential to be profoundly useful — if they can be mastered, that is. Terahertz waves are capable of penetrating dry clothing, which would make them ideal for airport screenings. Additionally, they have the potential to generate far greater communication bandwidth. While their inability to penetrate moisture in the air would most likely prevent them from being used in point-to-point applications on Earth, they would be ideal for inter-satellite space applications.

But that’s not all; Padilla is also hard at work on metal-free metamaterials. These materials are designed specifically to absorb electromagnetic waves, as opposed to focusing or emitting them. They have the potential to be ideal for energy harvesting, or even detectors that could regularly scan for natural gas or methane leaks. Additionally they could be used to sort plastics for recycling or to monitor the health of crops. While controlling the waves — let alone manipulating them effectively — is still a work in progress, the experts at Duke are convinced that further research could hold the key to unlocking the joint potential of waves and metamaterials.