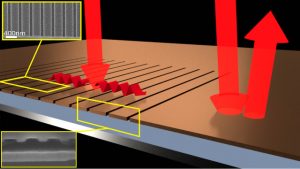 Infrared detectors can see through fog, the dark, and other situations where visible light isn’t available. Unfortunately, this equipment is expensive ($100,000 for one detector) and requires cooling -200 degrees Celsius. A team of researchers from several Australian universities have made a breakthrough in optics that could make infrared technology cheaper and easier. They used a new technique to achieve almost 99 percent light absorption in ultrathin absorbers.

Martijn de Sterke, a researcher from the University of Sydney’s School of Physics, explains:

Conventional absorbers add bulk and cost to the infrared detector as well as the need for continuous power to keep the temperature down. The ultrathin absorbers can reduce these drawbacks. By etching thin grooves in the film, the light is directed sideways and almost all of it is absorbed, despite the small amount of material – the absorbing layer is less than 1/2000th the thickness of a human hair.

Typically, infrared detectors use absorbers made from complex nanostructures, metamaterials, or complicated combinations of metals and non-metals. This makes them bulky, expensive, and requires continuous power for temperature control. The Australian researchers etched grooves into thin film light absorbers to achieve nearly-perfect light absorption without the drawbacks of conventional absorbers. They say this method isn’t restricted to a particular material and could be applied to many naturally occurring weak absorbers.

Now that infrared detection can be achieved inexpensively and without cooling, potential applications could expand beyond defense to also include autonomous farming robots, medical devices, and consumer electronics. The results are published in the journal Optica.