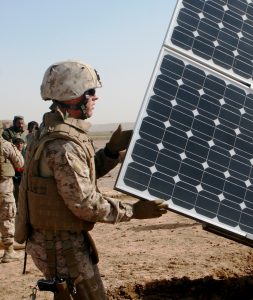 The Department of Defense aims to use renewable energy sources to meet at least 20 percent of its energy demand by 2020. In recent years, the military has taken steps to transition to renewable energy sources, but the ultimate goal has not changed: national security. Officials from several branches reiterated this point at the sixth Defense Renewable Energy Summit, organized by Infocast, in Arlington, Virginia last week. Col. Brian Magnuson, the director of the expeditionary energy office in the Marine Corps explained:

Our tag line is expeditionary energy. We don’t do green.

While other branches of the government are pursuing clean energy for environmental or economic benefits, the military continues to be laser-focused on security. The Marine Corps., for example, has developed renewable energy systems that reduce the need for refueling trips in battlefields. Marines have also benefited from portable solar panels and backpacks that generate electricity. The Air Force is developing on-site distributed generation and smart microgrids, and the Army has 17 large-scale renewable projects underway.

We’re concerned about climate change … but the first mission is bombs on target. Where renewable sources and efficiency can help us there, I have seen the military grasp it like nobody’s business, but you’ve got to stay on target. The Department of Defense is not the Department of Energy.