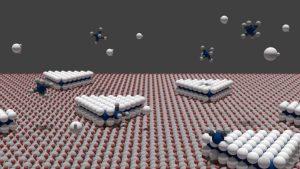 Scientists have created a new way to grow high-quality crystalline 2-D materials at scale. This is a major step forward for this technology, as growing the materials at scale has long proven a serious challenge. Perhaps most significantly, this innovation promises to be a game changer when it comes to the future of electronic devices.

Research on this particular subject has become a major priority for scientists ever since the properties of graphene were discovered. Graphene has effectively opened up a whole world of potential in 2-D materials, be they man-made or found in nature. Unfortunately, growing said materials has been no easy task. But now a new multi-step process allows scientists to make single crystals. The crystals are atomically thin films of tungsten diselenide. The film goes across large-area sapphire substrates.

Up until now, the majority of 2-D devices have been fabricated using small flakes that are exfoliated off of bulk crystals. To develop a device-ready technology, you have to be able to make devices on large-area substrates and they have to have good crystal quality.”

Sapphire is used as the substrate in the process, due to its crystalline structure. The film growth is then oriented in a crystal pattern. This process is known as epitaxy. Material forms in small clumps on the substrate as it is heated, making the clumps spread out across the substrate in a specific pattern. The material creates a large-area film that has no gaps and a minuscule number of defects.

The secret to this new process is a gas-source chemical vapor deposition. It allows scientists to control the island density and rate of spreading. With this unprecedented level of control, scientists can then create a single layer of 2-D material.

This work will prove especially significant in the advancement of industrial-scale electronics. Scientists have learned that there is a powerful interaction between the sapphire substrate and monolayer film. The substrate dominates the properties of the film. In order to compensate for this, scientists grew up to three layers; this led to a performance improvement of anywhere from 20-100 times.

Scientists now have a solid foundational understanding that will allow them to develop device-ready synthetic 2-D semiconductors. Further research into these discoveries is essential, and will no doubt lead to a deeper understanding of 2-dimensional materials and their many possible applications.