Turning Your Desk Into A Wireless Charger for Electronic Devices 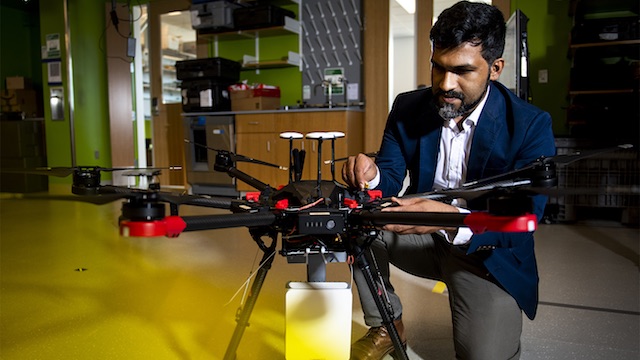 Scientists at Northeastern University are working to design a desk capable of operating as a wireless charger. This device would be able to wirelessly charge an assortment of devices simultaneously, from smartphones and laptops to tablets and even drones. The system would be able to take any surface and transform it into a wireless charger, allowing people to power their devices on the go.

“Our technology can sense a large variety of different kinds of electronic devices and intelligently drive enough power to charge them no matter where they are placed on the surface, or contactless in the air. Though likely you might not be charging a drone and a laptop at the same time.”

Kaushik Chowdhury, an associate professor of electrical and computer engineering at Northeastern University

The system seeks to use electromagnetic coils, which will be placed under flat surfaces. The coils will be carefully arranged as tiles under the surface. This will allow them to send energy to specific points on the surface — providing a charge to the device placed on it. The tiles are not connected, allowing scientists to adjust them as needed. The technology used in the system runs thanks to artificial intelligence, which requires little energy on demand. The use of artificial intelligence has the added benefit of letting the system automatically know where the charge needs to go on the object.

Machine learning algorithms have also played a large part in making this wireless charging system a reality. This is used to determine whether an object placed on the surface requires power. Once the machine learning has determined that a charge is required, energy is sent out from one master tile. The energy is sent to the next tile, while the first tile turns off to further conserve energy. The energy continues to move from tile to tile until it reaches the device in need of charging.

While the system works flawlessly in theory, in practice there are still quite a few issues to deal with. But they believe that with some tinkering and adjustments, they will be able to successfully develop contactless wireless technology capable of charging drones in mid-flight. A drone would simply have to hover over the surface to receive a charge. Scientists behind the system will continue to work on streamlining it, and have even founded a company in the hopes of turning their theory into a working reality.