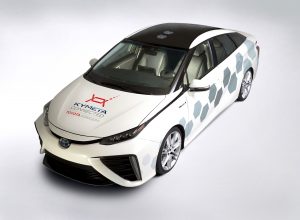 Toyota is showing off a fuel cell vehicle with satellite communications technology at the 2016 North American International Auto Show in Detroit this week. The research vehicle on display is based on Toyota’s Mirai fuel cell vehicle, but equipped with a special satellite antenna from Kymeta, a U.S.-based company that specializes in flat-panel antenna technology.

To keep up with the increasing demand for wireless connectivity in the next generation of “smart” cars, Toyota is exploring satellite technology, which could have several advantages over cellular networks. While 4G/LTE networks are limited to a small slice of the wireless spectrum, there is more space available for satellite communications. Taking advantage of satellite technology could give connected cars the data capacity they require for automated driving features, entertainment, navigation, and automatic software upgrades. 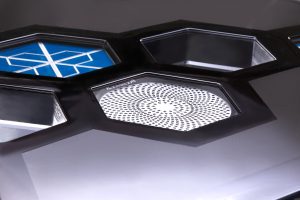 Typically, satellite communication has required dish-style antennas on the ground that mechanically steer to track satellites as they move across the sky. These old-school dishes are too unwieldy for cars, but Kymeta has now developed flat, lightweight antennas with no moving parts. Instead, they use software and liquid crystal technologies to electronically follow satellites. In Toyota’s test vehicle, these antennas look like stickers attached the Mirai. Eventually, this satellite technology could deliver a terabyte of data to cars each month, but the technology isn’t ready for the roads just yet. In the meantime, Toyota plans to add data communication using cellular networks to a range of new models beginning in 2017.