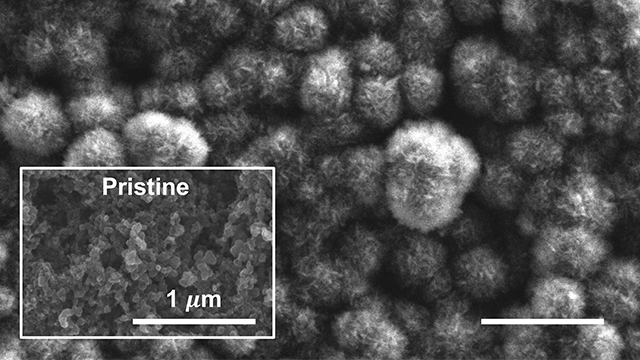 Photo Credit: Courtesy of the researchers

Although this technology is still in its infancy, its success could significantly help in the tailoring of electrochemical carbon dioxide conversion reactions. This could theoretically help to reduce the emission of dangerous greenhouse gases into the atmosphere.

The battery is constructed out of carbon, lithium, metal, and a specially designed electrolyte.

Most power plants that use carbon capture systems end up using around nearly 30 percent of the electricity they create to power the process of capturing, releasing, and storing carbon dioxide. Scientists have long been searching for a way to reduce this number, without success. The difficulties have been compounded by the simple fact that carbon dioxide is not especially reactive, forcing scientists to explore alternative options.

Traditionally, getting carbon dioxide to show significant activity under electrochemical conditions is a tricky affair. It requires large inputs of energy from high voltages. This process normally ends up being inefficient and overly expensive. Scientists began looking into the possibility of using carbon-dioxide-capture chemistry to make carbon-dioxide-loaded electrolytes.

In order for this process to work, scientists had to develop a specific electrolyte system. Researchers utilized a non-aqueous electrolyte, so as to limit the available reaction pathways. This also made it easier for scientists to determine the viability of the reactions.

While early results were extremely positive, the system still has to be optimized. In order for it to be used extensively it will require further development. One of the major issues at this juncture is the cycle life of the battery: it’s limited to a mere 10 charge-discharge cycles. Scientists believe that lithium-carbon dioxide batteries are still a few years away from being on the market.