This Chip Has 1,000 Independent Processors 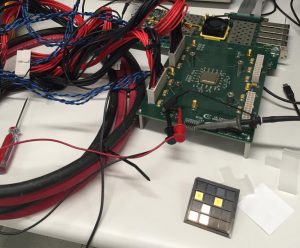 A team of electrical and computer engineers at University of California, Davis built the first microchip containing 1,000 independent programmable processors. The next best chip only has 300 processors. Their “KiloCore” chip can process 1.78 trillion instructions per second and contains 621 million transistors.

Despite this extremely high computing capacity, the chip is also energy efficient. It can execute 115 billion instructions per second while only using 0.7 Watts of energy—an amount so low that it could be powered by a single AA battery. According to the researchers, the chip is 100 times more efficient than a laptop processor. The high output and low energy use is made possible because each core processor is independent, so it can shut itself off to conserve energy when it is not being used.

The chip could eventually be used for wireless coding/decoding, video processing, encryption, and other applications that require processing large amounts of parallel data, such as scientific research or datacenter record processing.