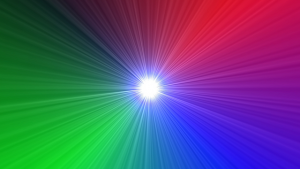 Engineers at Arizona State University (ASU) have demonstrated the world’s first white lasers. For decades, scientists have faced a challenge: white light is made from a mix of red, green, and blue light, but lasers can only beam one specific wavelength of light at a time.

The ASU team saw great potential for white laser beams, which are brighter, more energy efficient, and could cover more colors than the LEDs that are used in standard displays. They could be used in consumer electronics to provide crisper displays that use less power. Better yet, white lasers could be used in Li-Fi, an emerging technology for high speed wireless internet that involves sending data over light instead of radio waves. This light-based communication uses LEDs for sending data ten times faster than traditional Wi-Fi systems. The ASU researchers say that lasers could be even better, with speeds of ten or even 100 times faster than LED-based Li-Fi.

To create white laser beams, the ASU team spent years trying to grow semiconductor crystals that could be used to make a single white laser. After many attempts, they came up with a unique growth process to create a nanosheet that did the trick. On July 27 in the journal Nature Nanotechnology, the researchers described “a novel nanomaterial growth strategy that enables separate control of the composition, morphology and therefore bandgaps of the segments.”

They manufactured three thin semiconductor lasers that each emit one of the colors needed for white light. By lining the semiconductors up next to each other, the researchers made a device can be tuned to create white or any other color in the visible spectrum. Thanks to this advance, in the future lasers could be used to light rooms, make better consumer electronics, and provide speedy wireless communication. However, creating a white laser in a lab is far from commercialization. In their experiment, the ASU researchers used a laser light to pump electrons to emit light. Before white lasers can be used in the real world, engineers will need to develop similar white lasers that run on battery power.

Source: ASU via Phys.org | The Verge | Photo by Lee Haywood