The Next Level of 3-D Printing 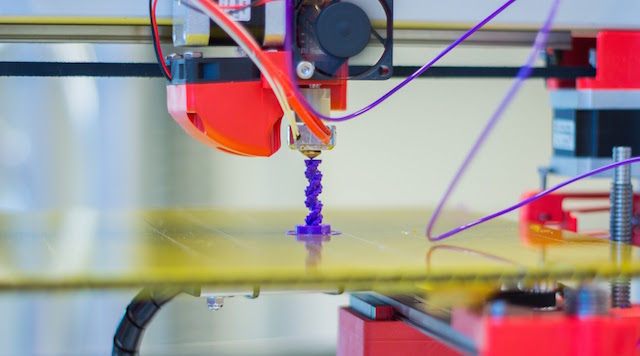 3-D printing is one of the coolest new technologies. Not only does it have seemingly countless practical applications (from industrial to medical), it’s a lot of fun to see things from your imagination come to life with just a few taps on the keyboard. But as the technology is still in its infancy, the possibilities for 3-D printing have barely been explored. Scientists have just invented a new way to expand the potential uses of 3-D printing — and from there, the sky’s the limit.

Typically, objects created with 3-D printing technology can’t have additional layers extended or adapted. What you see is what you get, since a 3-D printer works by layering polymers on top of each other. There’s never been a way to add components to a completed design — until now. Scientists at the Massachusetts Institute of Technology (MIT) have invented a method for adding components to 3-D printed designs, even after they’re finished.

The secret comes down to chemicals. Traditionally, the chemical composition of 3-D designs hardens upon completion to such an extent that scientists consider the layers ‘dead material.’ But the MIT team added a polymer layer to the standard 3-D printing mix. The chemicals themselves were made pliant by the judicious application of light technology. In particular, blue LED lights created an organic catalyst that kept the chemicals flexible long after older prototypes had completely hardened.

The polymer layer proved to be extremely adaptable, allowing experts to make changes to the 3-D printed object even after it had finished hardening. These lighter materials with their adaptable capabilities can do far more than allow people to add on to 3-D designs; it opens up a whole new realm of flexible technology.

The MIT team is certain that this new invention is the key to a diverse and dramatically different world of 3-D printing technology. Currently they are working on refining and perfecting their invention. Once it is streamlined and thoroughly studied, they’ll get to work on the next step: mass production and commercialization. From there, the next evolution of 3-D printing is anyone’s guess.