The New Photonic Switch Capable of Controlling Light Better Than Ever 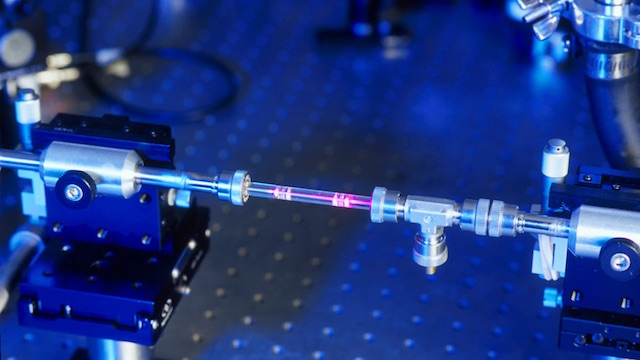 Researchers from the University of California, Berkeley have created a new, powerful type of photonic switch that could revolutionize the way we transfer information through data centers. The new photonic switch is capable of minutely controlling the direction that light passes through optical fibers, making it faster and far more efficient than traditional models.

The design of the new photonic switch contains over 50,000 ‘light switches’ that are microscopic in size. Every single switch can direct one of the 240 beams of minuscule light that passes through the device. The switches allow scientists to make the light turn right or travel straight, depending on whether or not the switch is activated. The switches are etched into a silicon wafer in 240 x 240 design; all told, the whole device is barely bigger than a stamp.

“For the first time in a silicon switch, we are approaching the large switches that people can only build using bulk optics. Our switches are not only large, but they are 10,000 times faster, so we can switch data networks in interesting ways that not many people have thought about.”

Ming Wu, professor of electrical engineering and computer sciences at UC Berkeley and senior author of the paper

Not many photonic switches are designed with the capability of controlling hundreds of light beams at once. When they are, they are built with mirrors or lenses. These must be physically turned in order to alter the direction light will travel, and each turn clocks in at about one-tenth of a second. Although that may sound fast, it dramatically slower than the speeds that can be achieved by electronic data transfer rates. The new design for the photonic switch includes tiny integrated silicon structures, which can be turned on or off in a mere fraction of a single microsecond.

Beams of light travel throughout the photonic switch thanks to nanometer-thin channels that run across the device. When they reach a switch, they either travel straight on through the channel if it is turned off, or make a sharp right turn if the switch is on. This makes for a more streamlined and efficient process, that doesn’t end up losing a lot of light in the process.

Scientists are now working to improve their manufacturing technique, which they believe will allow them to create even bigger and more powerful switches. These could be used in the development of artificial intelligence and for creating high-powered supercomputers.