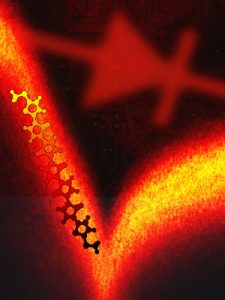 The new method for creating single-molecule diodes is relatively simple: the researchers surrounded the active molecule with an ionic solution and used gold metal electrodes to contact the molecule. Columbia’s new molecule performs 50 times better than previous designs—it can carry 0.1 micro Amps in one direction, which might not sound like much, but it’s quite efficient if you consider that we’re talking about a diode that is so small you can’t even see it. Furthermore, it allows just 1/250th of that to flow in the opposite direction.

This little diode is big news for the semiconductor industry because it represents the ultimate miniaturization for electronic devices. According to the researchers, the new technique can be applied to all types of nanoscale devices, even those that are made with graphene electrodes. The researchers are now working on achieving even better performance using new molecular systems to create diodes, as well as digging deeper to understand the fundamental physics that underpin their discovery.

It is truly a triumph to be able to create something that you will never be able to physically see and that behaves as intended.